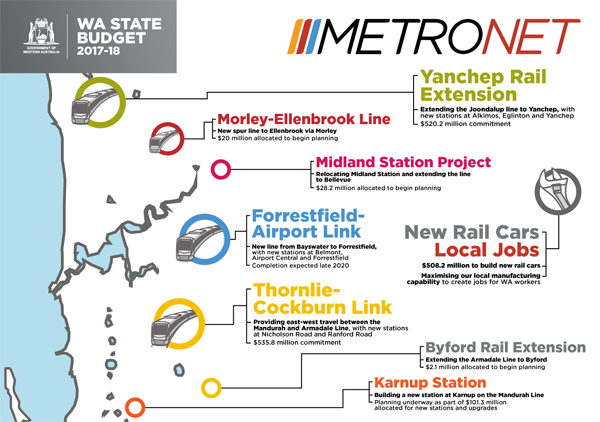 In a bid to better connect Perth and its surrounding suburbs, aid future residential needs, create jobs and ease congestion on Western Australian roads, the State Government has developed a long term plan in the form of Metronet. This plan will deliver seven priority rail projects to achieve these aims.

Metronet is just one of the topics on this year’s 9th Annual WA Major Projects Conference agenda. Being held on the 21st and 22nd of March 2018 at the Perth Convention & Exhibition Centre, the Conference brings together some of the infrastructure industry’s best innovators, planners and experts.

Anthony Kannis, Metronet Project Director from Public Transport Australia, will discuss Metronet’s Stage One outline during his presentation at the Conference. Stage One encompasses $1.2 billion of the government’s overall funding. This stage is set to deliver the Forrestfield – Airport Link by 2020 and the Thornlie – Cockburn Line by 2021, along with planning aims for various other included sub-projects.

Beginning from the northern Perth region, Yanchep (approx. 56 kilometres from Perth) will gain a new rail extension from the Joondalup line and new stations will include Alkimos, Eglinton and Yanchep. The extension currently has $520.2 million committed to it.

The Morley – Ellenbrook Line will be a deviation from the Midland Line to Ellenbrook, with a spur to Morley. The line has $20 million allocated to its production and the government are in the planning process. Part of this planning includes the consideration of a rail tunnel. Geotechnical engineering is taking place as part of the required planning process. This includes various options being submitted to Infrastructure Australia by the WA State Government.

Additional changes are planned for the Midland Line including the relocation of Midland Station and a line extension to Bellevue. Approximately $28.2 million has been allocated for the development.

A new link from Perth Airport to Forrestfield is underway and expected to be completed in 2020. The instalment will include a new line from Bayswater to Forrestfield, with news stations at Belmont, Airport Central and Forrestfield.

The Armadale Line will see further development with the addition of the Byford Rail Extension. Currently in the planning stages, the project has an allocation of $2.1 billion and will include the new extension from the Armadale Line to Byford.

Last is the new rail station at Karnup (approx. 62 kilometres south from Perth). Located on the Mandurah Line, the station is currently being planned and is part of the $101.3 million dedicated to new stations and upgrading existing infrastructure.

Additional to the various line projects, $508.2 million has been allocated to the creation of new rail cars. This allocation will utilise local manufacturing and will create local jobs for Western Australian workers.

Funding for the Metronet project comes from three main sources. First is the reallocation of monies originally set aside for the Perth Freight Link project, second is the project revenue created from government strategic land sales and third is the funds created by various value capture opportunities.

Early November 2017 saw the sale of three State Government sites. Located in Claremont, Jolimont and Shoreline, the land sites have a potential cumulative worth of $122 million. These will go on to be developed by residential housing investors.

The 9th Annual WA Major Projects Conference 2018 is occurring on the 21st and 22nd March 2018 and will be held at the Perth Convention & Exhibition Centre. The Conference is the state’s premiere major projects event and brings together senior-level experts to discuss WA’s future.

Expotrade is a global conference and event organizer with its head office based in Melbourne, Australia. Expotrade has delivered some of the largest, most successful B2B industry conferences and events in the areas of infrastructure, major projects, sustainability, technology & architecture. For almost 10 years, our unique blend of knowledge, experience and flexibility has accomplished an array of consistently top quality events. Today, Expotrade events enjoy such a distinctive edge, they are amongst the best patronised in the calendar.